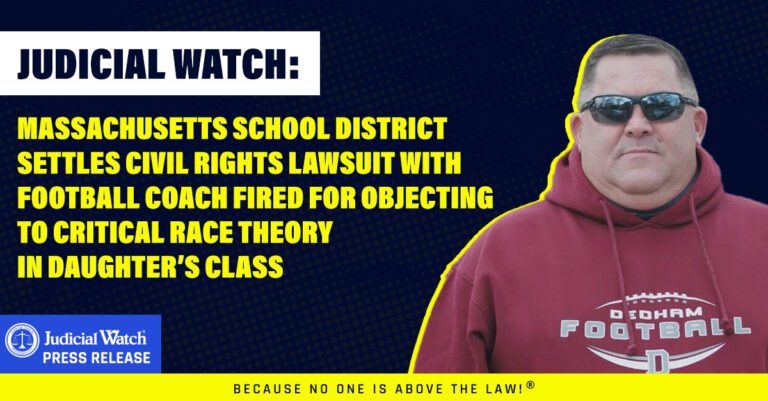 (Washington, DC) – Judicial Watch announced today that its client David Flynn, who was removed from his position as head football coach after exercising his right as a parent-citizen to raise concerns about critical race theory and Black Lives Matter propaganda in his daughter’s seventh-grade history class, settled his civil rights lawsuit against his former employers at Dedham Public Schools. As part of the settlement, the Superintendent of Dedham Public Schools, Michael Welch, acknowledged “the important and valid issues” raised by Flynn and specific changes in school policies because of Flynn’s complaint, including banning teachers from promoting Black Lives Matter to students online.

The Superintendent’s acknowledgment is the result of a February 2021 lawsuit filed in the United States District Court for the District of Massachusetts against the superintendent, high school principal, and high school athletic director for retaliating against Flynn for exercising his First Amendment rights (Flynn v. Forrest et al. (No. 21-cv-10256)).

The superintendent wrote in the letter that Flynn’s concerns were valid and that the school district is amicable to the settlement:

I hope you and your family are well. I am writing this letter to acknowledge the important and valid issues you raised regarding the Dedham Public Schools and the subsequent lawsuit you filed in federal court. I am pleased that we are able to amicably settle this matter after the recently filed appeal of the court’s decision.

First and foremost, I want to acknowledge and validate the concerns you initially raised regarding your daughter’s experiences at Dedham Middle School. You had every right to inquire about these issues, and you followed the appropriate steps in attempting to learn more. You correctly pointed out that the 7th grade social studies curriculum had significantly changed and parents were not informed of these changes. In probing this matter further, you discovered that the district’s website did not accurately reflect the new curriculum content, and parents were unable to understand what was being taught. Your legitimate questions prompted additional conversations at the School Committee level that ultimately led to the establishment of a Curriculum Advisory Committee that now brings together parents, community members, and district educators to broadly review and more thoroughly communicate curriculum changes and concerns. Curriculum updates are a necessary and important part of the work of school districts, and effectively communicating these improvements is a critical component of this process.

Your initial inquiry triggered a larger internal conversation about the district’s oversight in the teaching of these new curriculum units. More specifically, the sequencing of the curriculum’s identity unit and the virtual use of a Black Lives Matter emoji t-shirt by a teacher sparked a series of intense conversations about teacher autonomy and the importance of balanced messaging and viewpoints in the classroom. As you pointed out, positive intentions can often have unintended negative impacts on students. Ultimately, I directed staff to remove these t-shirt emojis and instructed them to not wear these in the classroom in the future.

Finally, I understand that after you raised these concerns at the classroom level, you left that initial conversation expecting to hear directly from the building principal. It appears this was unclear within the school and you did not hear back in a timely manner. I am sorry for this breakdown. Effective two-way dialogue among parents and school staff is the foundation of mutual trust. While we pride ourselves on this connection, in this particular instance this fueled frustration and identified room for improvement.

I regret that these initial justifiable concerns ultimately led to where we are today. As you have indicated, I appreciate your recognition of the opportunity to have improved the trajectory of this sequence. With this settlement, I hope we are able to put any divisions behind us and begin the important work of healing through better conversations and listening.

I recognize the school district’s opportunity to improve based upon the issues you have identified, and I thank you for raising them. As educators, I believe we can always learn from our experiences. Thank you for your many years of dedicated commitment to the development of student-athletes in Dedham.

“This a remarkable victory for Coach Flynn, as his federal civil rights lawsuit resulted in the Dedham School District admitting that he was absolutely right to be concerned about the district’s introducing a new, controversial CRT-style curriculum without parental notice or involvement,” said Judicial Watch President Tom Fitton. “And, Coach Flynn also appreciates that the teachers will no longer be able to use virtual learning to push Black Lives Matter symbols. It shouldn’t have taken a federal civil rights lawsuit for the school district to do the right thing. We hope other school officials take note they must treat parental curriculum concerns with respect and avoid radical indoctrination of children.”

“The past two years have been difficult for me and my family. I thank my family, friends, and everyone else who reached out for their continued support,” said Coach Flynn. “With Judicial Watch’s help, I can move on from this challenging situation knowing that by raising my concerns through the appropriate channels I made a difference for the students and families of Dedham Public Schools. I hope other parents can learn from this and not back down from fighting for what is best for their families.”

Judicial Watch lawsuits and FOIA requests on critical race theory and other leftist extremism are extensive: