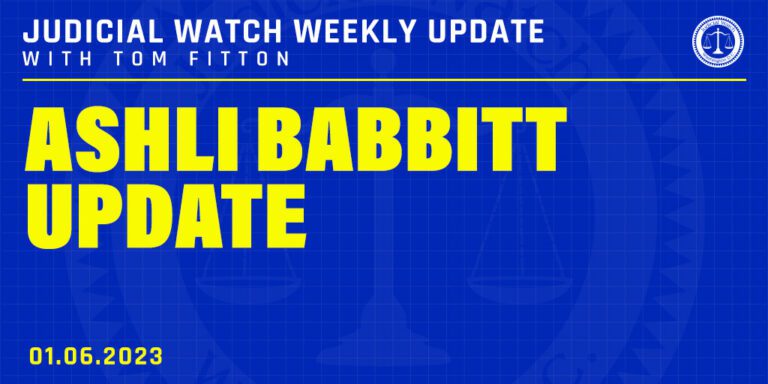 Thousands of Taxpayer Dollars Were Spent to House Ashli Babbitt Shooter and His Pet for Several Months in ‘Distinguished Visitor Suite’ at Joint Base Andrews
Al Qaeda Plans Plane Attacks as Air Marshals Are Sent to Mexican Border
On the Passing of Russell Pearce, Patriot and Former Arizona State Senate President

The shooting death of Ashli Babbitt is discussed frequently by the corrupt liberal media and their allies in Congress. So, it is up to Judicial Watch to uncover the full truth about the ONLY homicide tied to the January 6 disturbance.

We just received 31 pages of documents from the Department of the Air Force that show U.S. Capitol Police Lieutenant Michael Byrd was housed at taxpayer expense at Joint Base Andrews in Maryland after he shot and killed U.S. Air Force veteran Ashli Babbitt inside the U.S. Capitol on January 6, 2021.

Judicial Watch obtained the records in response to a September 2022 Freedom of Information Act (FOIA) lawsuit filed in the U.S. District Court for the District of Columbia after Joint Base Andrews, the Civil Rights Division of the Justice Department, and the FBI failed to respond to three July 2022 FOIA requests about Byrd’s housing at Joint Base Andrews while his name as the shooter of Ashli Babbitt was being withheld from the public by the government (Judicial Watch v U.S. Department of Defense and U.S. Department of Justice (No. 1:22-cv-02948)).

In our complaint, we explained to the court that we had asked all three government agencies for all records relating to the billeting of Byrd at Joint Base Andrews during the period from January 6, 2021, to July 2022, including authorization papers, housing, meals, transportation, and visitor logs.

The documents show that Lieutenant Byrd and a pet stayed in a “Distinguished Visitor Suite” at the “Presidential Inn” (part of Air Force Inns) under a “Capitol Police Presidential Inn Reservation” for the period July 8, 2021, through January 28, 2022.

A representative at Joint Base Andrews informed us that a “Distinguished Visitor Suite” is typically reserved for officers at the rank of O-7 (Brigadier General or higher.).

An August 2021 email from the assistant hotel manager indicates that the U.S. Capitol Police had been paying Byrd’s bills by phone “every 10 days.”

In an email thread beginning in November 2021, an accounting officer from the U.S. Capitol Police asks the Presidential Inn’s assistant lodging manager to provide detailed invoices reflecting all of the charges incurred by Lt. Byrd while staying at the Inn, in an email titled “Reservation Information-USCP [US Capitol Police] guest.” The manager then provides “folios” for Byrd’s reservation at the Inn from July 8 through November 11, 2021. When asked to explain pricing changes for Byrd’s lodging, the hotel manager explains that higher rates were due in part to the fact that Byrd moved from a “Temporary Lodging Facility” into a “Distinguished Visitors Suite.”

On February 7, 2022, the U.S. Capitol Police again asked the hotel manager for detailed invoices for Byrd’s stay. The manager confirmed that Byrd checked out on January 28, 2022, and that there were “sundry items that were used in the room that were not paid for before the guest left.

The email appears to confirm that the Capitol Police were covering the cost of Byrd’s stay at the Presidential Inn, when a Capitol Police accounting officer tried to clarify Byrd’s hotel bill, asking the hotel manager, “So the hotel is charging USCP for the room and pet fee for January 28-30, or not?”

In June 2022, we produced DOJ records related to the shooting of Babbitt that included a memo recommending “that the United States Attorney’s Office for the District of Columbia decline for criminal prosecution the fatal shooting of Ashli McEntee [Babbitt],” also noting that the shooter, Byrd, “did not create a police report or documents” related to the shooting of Babbitt. A footnote details missing evidence: “During the debrief of Lieutenant Byrd, he did recall writing a few sentences on an evidence bag the evening of January 6, 2021, at the request of a crime scene officer. To date, the bag has not been located by USCP or MPD.”

In November 2021, we received multiple audio, visual and photo records from the DC Metropolitan Police Department about the shooting death of Ashli Babbitt on January 6, 2021, in the U.S. Capitol Building. The records include a cell phone video of the shooting. An audio file of a police interview of the shooter, Byrd, indicates he declined to cooperate.

We previously uncovered records from the DC Metropolitan Police showing that officers reported they didn’t see a weapon in Babbitt’s hand before Byrd shot her and that Byrd was visibly distraught afterward. One officer attested that he didn’t recall hearing any verbal commands before Byrd shot Babbitt. The records include internal communications about Byrd’s case and a crime scene examination report. Investigators who wrote the January 6, 2021, Metro PD Death Reportfor Babbitt (identified as Ashli Elizabeth McEntee-Babbitt Pamatian) note that the possible Manner of Death was “Homicide (Police Involved Shooting).”

We are engaged in a comprehensive, independent investigation into the January 6 disturbance:

Our investigations and litigation are far from complete, so be sure to check back here often for updates.

The Biden administration’s disdain for security at the border is echoed in its carelessness with security in the skies. Specially trained sky marshals have been deployed to do routine chores at the border – as our Corruption Chronicles blog reports.

The threat could not come at a worse time, as the Biden administration leaves aircraft at risk by sending 150-200 FAM monthly to the southern border to help deal with what it calls “a surge in irregular migration.” The deployments will continue indefinitely, according to multiple FAM sources, and the specially trained aviation security specialists are outraged. The agency works under the Transportation Security Administration (TSA), which was created after 9/11 to prevent another terrorist attack. FAM is charged with protecting commercial passenger flights by deterring and countering the risk of terrorist activity. Nevertheless, in late October, the Biden administration began deploying the highly trained law enforcement officers to busy Border Patrol sectors to help with hospital watch, transportation, security and welfare checks at migrant facilities.

Days later the Air Marshal National Council, which represents thousands of FAM nationwide, accused TSA Administrator David Pekoske and FAM Director Tirrell Stevenson of violating federal law and overstepping their authority by assigning air marshals to assist the U.S. Border Patrol with the illegal immigration crisis. In a formal complaint to the DHS Inspector General, the group also accused the Homeland Security leaders of fraud, waste, and abuse of authority. Sending air marshals to El Paso, Texas, San Diego, California, Laredo, Texas, McAllen, Texas, Tucson, Arizona and Yuma, Arizona to transport illegal immigrants and conduct welfare checks has no relation to TSA’s core mission of transportation security, the complaint states. “The statute does not give the Administrator any authority to deploy TSA or FAM employees to the southern border to perform non transportation security related matters,” the complaint to the DHS IG says. “Further, under section (g) the statute describes what the Administrators authority is if an emergency, as defined by the Secretary of Homeland Security, is declared.” The act makes clear that the legislative intent is to only allow TSA to exercise authority and deploy its assets for transportation security, the report to the DHS watchdog confirms.

Hours after learning about the latest Al Qaeda threat, the Air Marshal National Council fired off a letter to DHS Secretary Alejandro Mayorkas as well as Pekoske and Stevenson reminding them that deploying FAM to the southern border to perform humanitarian work is reckless and putting the nation at extreme risk. “We are once again requesting you immediately stop these dangerous and unnecessary deployments and let our FAMs do what the American taxpayers pay them to do, protect and defend our transportation system,” the letter reads. “We have to ask how can you justify sending FAMs to the border in huge numbers, when the border is in your words secure, and there is no emergency? Yet we have major security incidents happening right now affecting our aviation security.”

Sonya Hightower-LaBosco, a retired FAM who serves as executive director of the Air Marshal National Council, confirmed that FAM are still being pulled off flights at a rate of about 200 a month to serve illegal immigrants at stations along the Mexican border. “They are making sandwiches for them and driving them around like Uber or picking up supplies,” Hightower-LaBosco told Judicial Watch on New Year’s Day. The head of the council, David Londo, called the redeployment of air marshals to the southern border “insane” considering the latest aviation threat from Al Qaeda. “Either they don’t care about aviation security, or they really think it is secure,” Londo said.

On the Passing of Russell Pearce, Patriot and Former Arizona State Senate President

Former Arizona State Senate President Russell Pearce, architect of some of the most significant pieces of legislation to crack down on illegal immigration, died at age 75, his family said in a statement released on January 5, 2023.

We are proud to have worked with Russell Pearce. He was a hard-working, public-minded patriot who upheld the rule of law in the face of the slings and arrows of the open borders Left. As leader of the of the Arizona State Senate, Pearce was the chief sponsor of commonsense legislation that allowed law enforcement in Arizona to ask for proof of citizenship during traffic stops, as well as the “Legal Arizona Workers Act,” which required all Arizona employers to use the E-Verify system to confirm the eligibility of new employees and penalized employers who knowingly hired illegal aliens. Key parts of this legislation survived court challenges and continues to protect Arizona and all of America.

We fought with Pearce on several fronts to uphold Arizona’s landmark immigration laws.

The Arizona State Senate said in a statement:

Pearce was a God-fearing man and loved his country with all his heart. He was an ardent champion for secure borders and gave his all which it came to preventing the violence associated with dangerous cartel encroaching into our communities. He was passionate about public safety and had a fiery approach when it came to conservative causes, like limited government. He leaves a memorable legacy behind, and Arizona is a better place because of him.