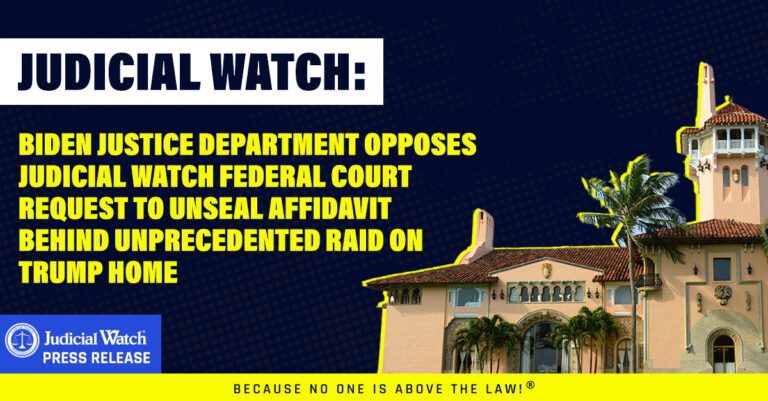 (Washington, DC) – Judicial Watch announced today that the Biden Department of Justice opposes its request that the court unseal the affidavit used to justify the controversial raid on the home of former President Trump. The Justice Department was ordered by Magistrate Judge Bruce Reinhart to respond by 5:00 pm today to Judicial Watch’s Motion to Unseal the warrant and supporting materials behind the FBI raid of President Donald Trump’s home in Mar-a-Lago. In its filing, the Justice Department alleged that releasing the affidavit would “cause significant and irreparable damage” to its ongoing criminal investigation.

It seems like the Biden Justice Department is telling the court what to do. Respectfully, the court should make its own independent assessment of the compelling public interest in transparency about this abusive raid.  The ‘criminal investigation’ the Biden administration is covering up reeks of corruption and dishonesty – and is based on a reinvention of law about presidential records that is at odds with the U.S. Constitution, court rulings, federal statutes, and prior government legal positions and practice. No administration should be able to raid the home of a former president and putative presidential candidate based on ‘secret’ reasons.

The U.S. Constitution and federal law give unreviewable authority to President Trump to take whatever records he wishes at the end of his presidency. The Biden administration’s dishonest depiction of personal records of President Trump it illicitly seized during the raid as “classified” is further demonstration that the raid was a brazen act of raw political abuse.

On August 12, Judicial Watch filed President Trump’s public statement with the court, in which he made it clear that he would not oppose the release of documents related to the August 8, 2022, raid. Later that day, the DOJ made a partial release of the Trump raid warrant materials.

Judicial Watch has taken a leading role in uncovering the Obama/Deep State spying and other abuses targeting President Trump and his associates.

Recently, Judicial Watch sued the DOJ for records ordered declassified and released by President Trump the day before he left office.  The records relate to “Crossfire Hurricane,” the controversial spy operation against President Trump, his 2016 presidential campaign, and other Trump associates, and have yet to be made public by the Biden administration.

In August 2018, the Justice Department (DOJ) admitted in a court filing that the Foreign Intelligence Surveillance Court held no hearings on the Foreign Intelligence Surveillance Act (FISA) spy warrant applications targeting Carter Page, a former Trump campaign part-time advisor who was the subject of four controversial FISA warrants. Judicial Watch litigation also uncovered the secret FISA warrants that confirmed the FBI and DOJ misled the courts in withholding the material information that Hillary Clinton’s campaign and the DNC were behind the “intelligence” used to persuade the courts to approve the FISA warrants that targeted the Trump team.