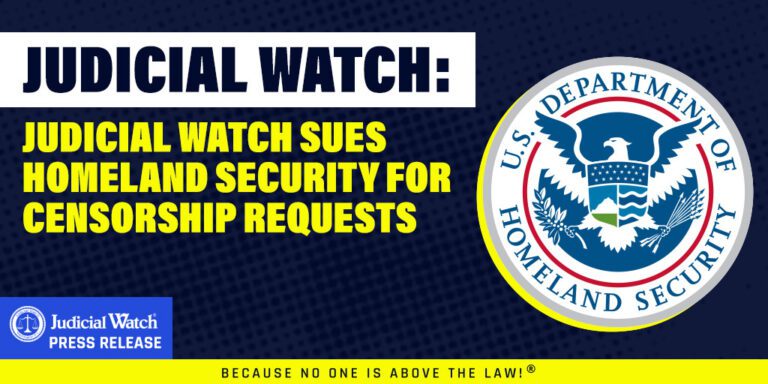 (Washington, DC) – Judicial Watch announced today that it filed a Freedom of Information Act (FOIA) lawsuit against the U.S. Department of Homeland Security (DHS) for all records of communications between the Cybersecurity and Information Security Agency (CISA), a division of DHS, and the Election Integrity Partnership (EIP), which was created to flag online election content for censorship and suppression (Judicial Watch Inc. vs. U.S. Department of Homeland Security (No. 1:22-cv-03560 )).

Judicial Watch filed the suit in the U.S. District Court for the District of Columbia after DHS failed to respond to its October 5, 2022, FOIA request for:

1.     All records of communication between the CISA and the EIP. This includes all “tickets” or notifications to the Partnership regarding election-related disinformation on any social media platform.

2.     All records regarding the July 9, 2020, meeting between DHS officials and representatives of the EIP.

3.     All records of communication between the CISA and the University of Washington’s Center for an Informed Public and/or Stanford University’s Internet Observatory regarding any of the following:

The Election Integrity Partnership was created in July 2020, just before the presidential election. According to Just the News:

Three liberal groups — the Democratic National Committee, Common Cause and the NAACP — were also empowered like the federal agencies to file tickets seeking censorship of content. A Homeland-funded collaboration, the Elections Infrastructure Information Sharing and Analysis Center, also had access.

Among the news outlets flagged by EIP were websites for Just the News, New York Post, Fox News, Washington Examiner, The Washington Times, The Epoch Times and Breitbart.

In May 2022, YouTube censored a Judicial Watch video about Biden corruption and election integrity issues in the 2020 election. The video, titled “Impeach? Biden Corruption Threatens National Security,” was falsely determined to be “election misinformation” and removed by YouTube, and Judicial Watch’s YouTube account was suspended for a week. The video featured an interview of Judicial Watch President Tom Fitton. Judicial Watch continues to post its video content on its Rumble channel (https://rumble.com/vz7aof-fitton-impeach-biden-corruption-threatens-national-security.html).

In July 2021, Judicial Watch uncovered records from the Centers for Disease Control and Prevention (CDC), which revealed that Facebook coordinated closely with the CDC to control the COVID narrative and “misinformation” and that over $3.5 million in free advertising given to the CDC by social media companies.