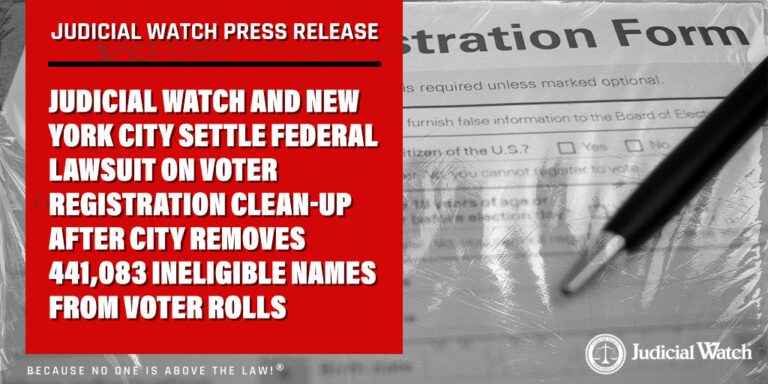 (Washington, DC) – Judicial Watch announced today that it is settling a federal election integrity lawsuit against New York City after the city removed 441,083 ineligible names from the voter rolls and promised to take reasonable steps going forward to clean its voter registration lists.

Judicial Watch filed a lawsuit in July against New York City after it failed to clean voter rolls for years. The lawsuit, filed under the National Voter Registration Act (NVRA), pointed out that New York City removed only 22 names under the federal law over six years (Judicial Watch v Valentine et al. (No.1:22-cv-03952)).

The Judicial Watch lawsuit detailed that New York City’s “own recent data concedes that there were only 22 total” removals under this provision “during a six-year period, in a city of over 5.5 million voters. These are ludicrously small numbers of removals given the sizable populations of these counties.” Moreover, the “almost complete failure of Kings, Queens, New York, Bronx, and Richmond Counties, over a period of at least six years, to remove voters” under a key provision of federal law “means that there are untold numbers of New York City registrations for voters who are ineligible to vote at their listed address because they have changed residence or are otherwise ineligible to vote.”

Today’s announced settlement details how the city responded to Judicial Watch’s notice about its voting roll deficiencies with a massive clean-up:

[The Board of Elections] notified Judicial Watch that going forward they intend to cancel registrations pursuant to Section 8(d)(1)(B) in each odd-numbered year in the months following a federal election.

Specifically, the city also agrees to track in detail report its voter roll maintenance efforts through 2025:

For both 2023 and 2025 … the [Board of Elections] will notify Judicial Watch … on or before March 31, by means of separate excel spreadsheets for Bronx County, Kings County, New York County, Queens County, and Richmond County, of the number of removals, including removals pursuant to … the NVRA, made during the previous two years.

The NVRA requires states to “conduct a general program that makes a reasonable effort to remove” from the rolls “the names of ineligible voters” who have died or changed residence. Among other things, the law requires registrations to be cancelled when voters fail to respond to address confirmation notices and then fail to vote in the next two general federal elections. In 2018, the Supreme Court confirmed that such removals are mandatory (Husted v. A. Philip Randolph Inst. (138 S. Ct. 1833, 1841-42 (2018)).

Judicial Watch is a national leader in voting integrity and voting rights. As part of its work, Judicial Watch assembled a team of highly experienced voting rights attorneys who stopped discriminatory elections in Hawaii, and cleaned up voter rolls in California, Ohio, Indiana, and Kentucky, among other achievements.

California settled an NVRA lawsuit with Judicial Watch and began the process of removing up to 1.6 million inactive names from Los Angeles County’s voter rolls. Kentucky also began a cleanup of hundreds of thousands of old registrations last year after it entered into a consent decree to end another Judicial Watch lawsuit.

In February 2022, Judicial Watch settled a voter roll clean-up lawsuit against North Carolina and two of its counties after the North Carolina removed over 430,000 ineligible names from the voter rolls.

In May 2022, Judicial Watch sued Illinois on behalf of Congressman Mike Bost and two other registered Illinois voters to prevent state election officials from extending Election Day for 14 days beyond the date established by federal law.

Robert Popper, Judicial Watch senior attorney, leads its election law program. Popper was previously in the Voting Section of the Civil Rights Division of the Justice Department, where he managed voting rights investigations, litigations, consent decrees, and settlements in dozens of states.