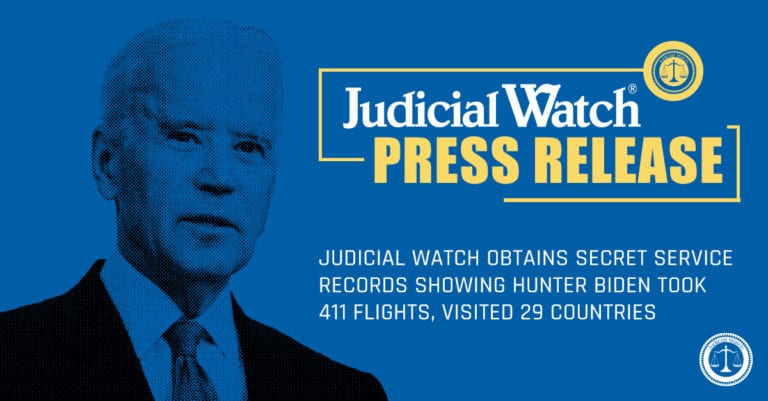 (Washington, DC) – Judicial Watch announced today it received records from the U.S. Secret Service showing that, for the first five and a half years of the Obama administration, Hunter Biden traveled extensively while receiving a Secret Service protective detail. During the time period of the records provided, Hunter Biden, son of then-Vice President Joe Biden, took 411 separate domestic and international flights, including to 29 different foreign countries. He visited China five times.

Records reflecting the dates and locations of travel, international and domestic, for Hunter Biden while he received a U.S. Secret Service protective detail; please note whether his travel was on Air Force One or Two, or other government aircraft, as applicable and whether additional family members were present for each trip; time frame is 2001 to present.

The Secret Service did not indicate, as was requested, whether Biden’s travel was on Air Force One, Air Force Two or other government aircraft, or whether additional family members were present.

The Secret Service records show that countries and territories visited by Hunter Biden, between June 2009 and May 2014, included:

The records were also provided, but were not made public, to Senate Finance Committee Chairman Chuck Grassley and Senate Homeland Security and Governmental Affairs Committee Chairman Ron Johnson in a request the senators sent to Secret Service Director James Murray on February 5, 2020.

In its cover letter to Grassley and Johnson, which was included in the records produced to Judicial Watch, the Secret Service said that the senators’ request was time and labor intensive, and they could only provide a limited amount of information by the senators’ imposed turnaround time of February 19.

According to reports, Vice President Joe Biden and  Hunter Biden flew on Air Force Two for the official trip to Beijing in December 2013. The records obtained by Judicial Watch from the Secret Service show Hunter Biden arrived in Tokyo on December 2, 2013 and departed for Beijing two days later. While it is typical for the families of the president and vice president to travel with them, questions have been raised about whether Hunter Biden used the government trip to further his business interests.

NBC reporter Josh Lederman, who was one of four reporters on the December 2013 trip, noted in an October 2, 2019 report that, “What wasn’t known then was that as he accompanied his father to China, Hunter Biden was forming a Chinese private equity fund that associates said at the time was planning to raise big money, including from China.”