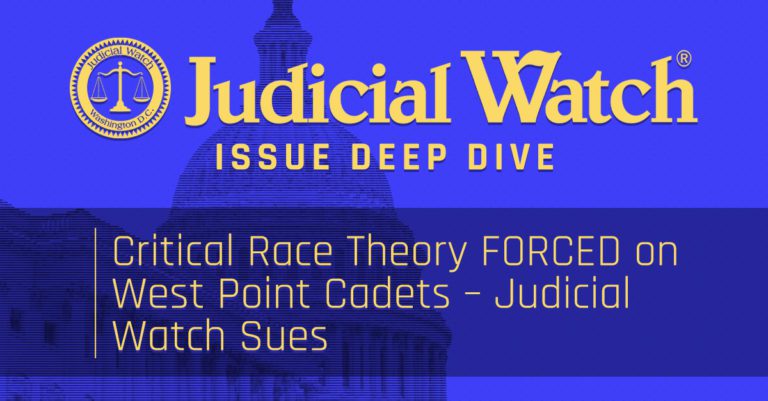 “…They want to destroy our military. This is a revolutionary approach, straight out of the Marxist playbook.”

Judicial Watch’s countless lawsuits and political investigations are raising alarm bells on the spread of critical race theory across the United States. From the DOJ’s Georgia Lawsuit, to public schools in Masschusetts, Maryland and elsewhere, policymakers are pushing for every issue to be viewed through the lens of race. As Judicial Watch President Tom Fitton explained during Friday’s Weekly Update, “this is a revolutionary approach, straight out of the Marxist playbook.”  Shockingly, as Fitton pointed out, it’s now being taught at West Point, “where our rising generation of leaders for the Army go to train,” Fitton explained. “They want to brainwash our incoming Army officers.”

In light of this revelation, Judicial Watch has sued the United States Military Academy for the following information:

Judicial Watch’s lawsuit was filed in conjunction with Congressman Mike Waltz’ (R-FL) recent discovery of controversial training materials at the U.S Army’s military academy, which included “examples of Corps of Cadets being mandated to attend seminars and presentations on critical race theory…” As Fitton reminded viewers Friday, Critical Race Theory is “not just a racialist approach, its about categorizing people by their immutable characteristics – sex, race, ethnicities, sometimes age, disability – it’s all part of that mix.”