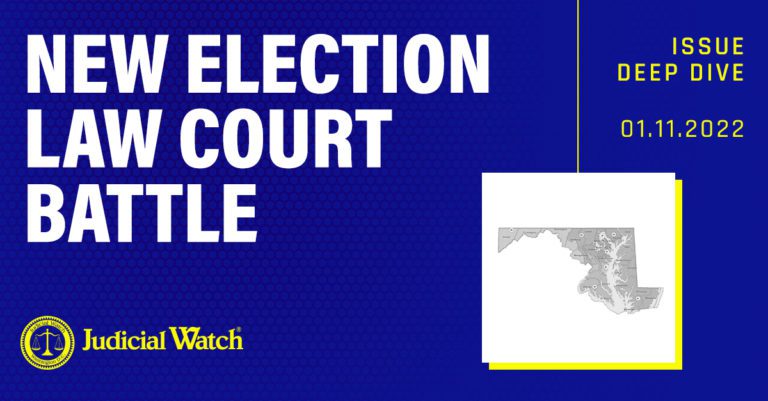 “The most abusive redistricting in the country seems to be happening in Maryland.”

Judicial Watch is fighting the Maryland state legislature’s attempts to gerrymander the state’s congressional districts. Representing voters in all eight of the state’s districts, Judicial Watch’s most recent election integrity fight is about protecting the voting rights of all Americans, Judicial Watch President Tom Fitton states. “While politics and redistricting go hand in hand,” Fitton argues, “the question is do they do that within reason, or do politicians abuse their power?”

Judicial Watch’s lawsuit alleges that the Maryland re-districting plan violates the state Constitution, which provides that “elections ought to be free,” and that “each legislative district shall consist of adjoining territory, be compact in form, and of substantially equal population. Due regard shall be given to natural boundaries and the boundaries of political subdivisions.” The recently released plan, Fitton argues, fails to respect these requirements, connecting rural Western Maryland with more heavily populated areas around the D.C. metropolitan area. Furthermore, “the irony is that they treat black people as pawns in these gerrymanders,” Fitton notes. “They take black communities and put them in districts to help get white, liberal congressmen reelected.” The result, Fitton assesses, is that “you have black communities in Baltimore being stuck with communities far from them.”

As the lawsuit states, Maryland’s 5th congressional district acts as “an umbilical cord designed to include Democrat voters in College Park to counterbalance the more Republican voters in the southern part of the state.”  Another Maryland congressional district was famously described by a federal appeals court as “a broken-winged pterodactyl, lying prostrate across the center of the state.” As Fitton concludes, “the most abusive redistricting in the country seems to be happening in Maryland.”